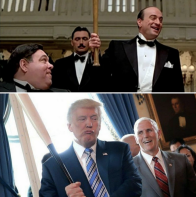 It’s also the day that saw Donald Trump attack his political opponents at the National Prayer Breakfast and give a bizarre, despair-inducing speech in the East Wing of the White House. In case you missed it, he called his opponents, including leaders of the Federal Bureau of Investigation and the House of Representatives and a sitting Senator, “scum” and “sleazebags” and whined about how poorly he had been treated. He invited the audience to stand up and testify to his greatness. Some day we’ll learn the pharmacological details. It’s also the day we learned that the Attorney General now has the right to approve any investigations into anyone running for office. And we heard that the debunked conspiracy theory Trump tried to bribe Ukraine’s president to legitimate–an effort the Senate just yesterday acquitted him of being thrown out of office for–was being pursued for investigation by his supporters. It’s the day, then, that we learned that despite the efforts of good women and men to save us, it’s entirely possible that this administration could continue for another four years. At least.

It’s been enough to make me feel like maybe we’ve lost.

Bob Marley and Donald Trump don’t belong in the same universe, much less the same post. I hate even thinking of them on the same day. But around 3 or 4 this afternoon, after spending so much time on Twitter being angry and appalled that someone I know only on Twitter told me nicely to go outside, I remembered something. I wrote some encyclopedia entries when I was in grad school to supplement my teaching, and in reading for one I wrote on Bob Marley, I learned something he said after an attempt was made on his life. The attack happened two days before a free unity concert organized by Jamaica’s prime minister, and it was thought to be intended to keep him from appearing at the concert. Injured, Marley played anyway. When asked why, he said, “The people who are trying to make this world worse aren’t taking a day off. How can I?”

To borrow another line of Marley’s, from his “So Much Things to Say,” “Remember that, when the rain fall/ It don’t fall on one man’s housetop.” It’s raining. The people who are trying to make the world worse are busy. No days off.