Associations are getting bad press lately, as in the recent Chronicle piece on the American Historical Association, most of it unfair (as these two responses argue). But I’m proud to be again taking part in the joint Association of Departments of English / Association of Departments of Foreign Languages Summer Seminar in Pittsburgh this year. This will be my tenth of these, my CV tells me. When I became Director of Graduate Studies in 2010, my chair sent me, and it was incredibly helpful, especially the Pre-Seminar Workshop for Directors of Graduate Study. I ended up going to the seminar and the workshop the first three years of my tenure as DGS and co-moderating the DGS workshop for the next three years; after a year in which I co-moderated a discussion on bullying on campus and of campus, I became Director of Undergraduate Studies last year and co-moderated a workshop, “Responding to the Decline in English Majors and Enrollments,” which I’ll be doing again this summer. 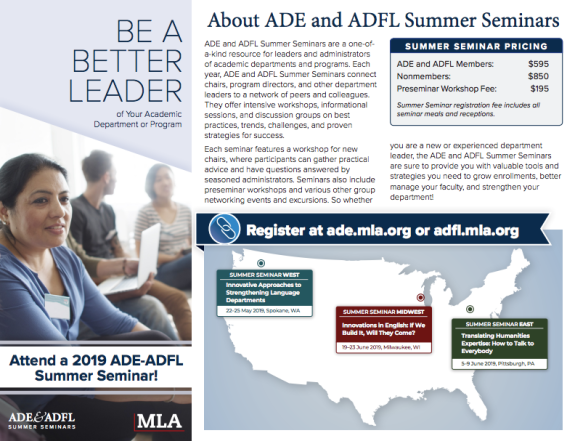 I can’t recommend these things highly enough. I’ve met people through the workshops and seminars who I’ve been able to rely on, who have helped me in my career and who I’ve been able to help in return, who have made my work easier and better in more ways than I can probably even remember. I can’t help but remember that it’s the ADE and the MLA that have made it possible.

When I came up through graduate school, things similar to those being said about the AHA were being said about the MLA: for some critics, it was uninterested in confronting the employment crisis, or too slow to do so. While I never think it’s out of bounds to criticize a professional organization, which are big ships and slow to turn, my experience with ADE (and in the work I’ve done as part of MLA and MMLA) has shown me that these associations are what their roots say they are, the joining together of companions. They’re not unions, and can’t force upper administration to stop balancing budgets on the backs of instructional labor, but they can help people share knowledge about how to do the best they can under sometimes very difficult circumstances and how to work to help those who circumstances effect most. And if they need to change course, their members have joined together to form them and, if necessary, can redirect them.

One thought on “Associations”